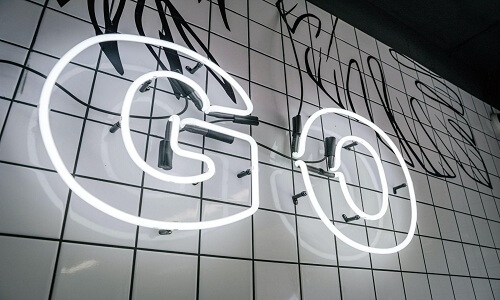 Go is an entirely open-source language offered by Google to create an environment for developers to build simple and robust software solutions. The concurrency mechanism of Go is its primary strength.

Like all coding languages, GoLang has its own uses, advantages, and disadvantages. Before you start using it, you should get to know more about Go. Here are some of the essentials.

Where does the name come from?

As we mentioned, the official name of this language is Go, but it’s interchangeable with GoLang. The moniker stuck because the official site has the domain name “golang.org.” In other words, the developers didn’t mean to call it GoLang, but users quickly adopted this name as well.

One of the reasons is that it’s easy to remember the moniker. Another reason is that it’s easier to search for the site by typing in the domain name instead of Go. It’s all about convenience, and there are no differences between these two names – they represent the same thing.

Go was first talked about in 2009, and it was made available as an open-source language back in 2012. It grew in popularity quickly because of Google’s reputation and offered concurrency, efficiency, readability, and simplicity.

How Go was developed

Go was developed by Google because the complexities within the company’s infrastructure were becoming too difficult to handle. As we mentioned, it was designed to remove all the issues associated with C++ and create a language that would simply address similar problems.

Most of the developers behind Go use Ruby and Python, and GoLang has borrowed many approaches from different languages. Go combines useability and readability from JavaScript and Python, including runtime efficiency and static typing similar to C.

Stability was a significant issue for developers, and all the features of this language are focused on this problem, including static typing with more flexibility. That helps improve runtime efficiency and prevent runtime errors.

First of all, you should know that Go is growing fast, and many people are learning how to use it. In general, when a software language is increasing in size, there are new opportunities for employment, development, and applications.

More importantly, if you’re looking for a job at Google knowing Go can open up new career opportunities. Go developers are currently third on the list of highest-paid professionals. Given how quickly it’s growing in popularity, we can only expect higher earnings in the future.

GoLang has many applications, including cloud computing, data science, and web development. GoLang web scraper development is also picking up, and there are new applications each year. Oxylabs, one of the top-tier web scraping services providers, wrote a blog post on the practicalities.

Google has done a great job at providing all of the relevant documentation on their site. Developers can find all the content they need and understand it regardless of their level of knowledge. However, the GoLang community has also grown quickly, and new developers can quickly find useful information and the answers they need.

The whole software world is going towards simplicity, and Go is the epitome of this tendency. Anyone who has fundamental knowledge of one of the most popular is Go programming languages can quickly learn how to use Go.

Potential uses in the future

The demand for microservices will only continue to grow in the future, and this is where GoLang shines. Many large companies have already adopted Go, including Dropbox, Dailymotion, Google, Uber, and Twitch, so it will find more uses.

GoLang has proven as an excellent option for the back-end since it can deal with many requests while being concurrent. The great uptime and lightweight design make it perfect for creating robust websites in no time. We are already witnessing the mass adoption of GoLang for DevOps applications, system programming, database development, stand-alone tools, network programming, and distributed networking.

The level of support, interoperability, portability, simplicity, and speed is excellent, and we can freely say that this software language has a bright future ahead, and GoLang web scraper development is just the beginning.

We hope this post has helped you understand the core of Go and how you can use it. As an aspiring developer or an expert looking to expand into different fields and learn something new, you should definitely consider Go. On top of that, you will make it easier for yourself to find a job with knowledge of Go.